Committee to Consider Waiving Exam Requirement at Meeting Next Week

The Committee met for over three hours in a special session after receiving a petition requesting the in-person exam be cancelled in lieu of diploma privilege. Bar applicants were not notified of the special session aside from an obscure notice on the CBEC website posted Tuesday. Organizers with Diploma Privilege for Connecticut relayed the meeting notice to many applicants after they became aware of it late Wednesday afternoon. The Committee allowed comments by law school graduates and faculty only after an overnight push by members of the legal community. However, the Committee voted to transition to an online bar exam before allowing the more than 60 attendees to raise their concerns. Speakers cited documented technical problems and inequities in similar online exams and asked the Committee for a one-time emergency waiver for 2020 applicants. So far, four states have adopted emergency diploma privilege policies: Washington, Oregon, Utah, and Louisiana. The Committee agreed to consider adopting the proposal at their regularly scheduled meeting on Friday, July 31.

“A once-in-a-century pandemic demands a once-in-a-century solution,” said Glenn Holmes, an organizer with the group and a 2020 University of Connecticut School of Law graduate. “Diploma privilege ensures that qualified bar applicants can begin their careers without the uncertainty of an online exam threatening their livelihoods.”

“The American Board of Surgery, Advanced Placement Exams, and numerous academic institutions have all tried online exams, and they have all failed,” said Holmes. “The Committee needs to adopt diploma privilege in light of the manifest flaws with an online exam and the overwhelming testimony they heard today.”

Diploma privilege would mean that this year’s bar applicants who graduate from Connecticut-approved law schools and fulfill the Committee’s ethics and “character and fitness” requirements would be allowed to practice law in the state. Diploma Privilege for Connecticut said their petition, which opened three days ago, has already collected signatures from 133 bar applicants, 49 law professors and practicing attorneys, and 281 concerned citizens. The group says it will provide an additional letter to the Committee before their next meeting and is lobbying the General Assembly and Governor’s office to intervene if the Committee does not adopt the policy.

About Diploma Privilege for Connecticut

Diploma Privilege for Connecticut was formed by 2020 law school graduates in response to the impact of the COVID-19 global pandemic upon the legal profession. Learn more at https://www.facebook.com/diplomaprivilegect/. 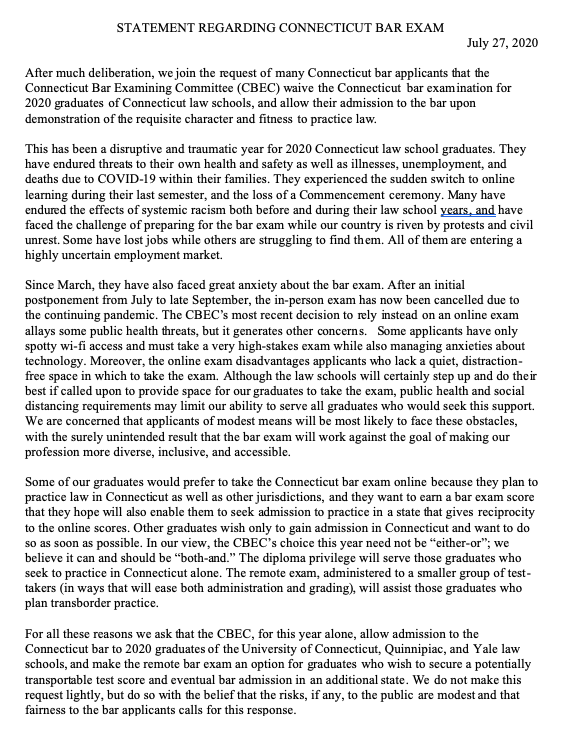